Avery was born in the Town of German on July 12, 1922 to Avery and Bertha (Temple) Torrey.  He was raised on the family farm in German and while growing up had many jobs besides working on the family farm.  As a young boy, Avery had a paper route and would walk all the way from German to McDonough to deliver the daily paper.  Avery attended Cincinnatus Central School.  At the age of 20, Avery joined the U.S. Army as a Private First Class with Company A, 103rd Medical Battalion 28th Division.  He finished his schooling in the service.  Avery was sent overseas and saw action in Luxemburg, France, Germany and Belgium.  He was honorably discharged from the Army on September 19, 1945.

On October 29, 1945, Avery married the former Geneva Gage and together they had six children:  Garry, Edward, Leona, Natholie, Arthur and Cynthia.  Avery and Geneva raised their childreni n Smithville Flats before settling in the family home in Cincinnatus.  He graduated from SUNY Agricultural and Technical College at Farmingdale in 1967.  He held many positions over the years with his last job being in security at SUNY Cortland.  He was also a life member of the Edwin Wilbur, Jr. American Legion Post #1478, McDonough.

Avery loved anything mechanical, from race cars to lawn tractors, and could always be found out working in his garage.  If he wasn't there, he was fishing his second favorite pastime.

It's hard to sum up a person's life in just a few paragraphs.  Our father was so much more than that.  He will be eternally missed by all who knew and loved him.

In addition to his parents, he was predeceased by his wife, Geneva in 2009 and his eldest son, Garry in 2009.

In keeping with his wishes, there will be no calling hours or funeral service.  A graveside service, with military honors, will be held at the Westview Cemetery on Wednesday, June 19, 2013, at 11:00 a.m.  At that time, a graveside service will also be held for Geneva.  Those wishing to remember Avery and Geneva with a memorial donation are asked to consider the Westview Cemetery Association, c/o Cindy Nogva, 196 County Route 5, McDonough, NY 13801, or a charity of one's choice.

To plant memorial trees or send flowers to the family in memory of Avery Torrey, please visit our flower store.

In your time of sadness, remember the good times you shared with your dad.  They will take you to a happier place and keep him close to your hearts.

Our thoughts and prayers are with you and your family,

To all the children and family, I'm sorry to read of your Dad's passing. He always spoke when I saw him, a very friendly man! Dad's are very special and I know you will miss him. You are all in my prayers! God Bless You all!!!

Sorry for your loss.  There was a time when we both worked at Suny Cortland and we saw a lot of each other and I have fond  memories of him.  He will be missed.
Butch & Dawn

Please accept our deepest and most sincere condolences on the passing of your Dad.  He was always a gentleman to me and was greatly loved by my Mom and Dad.  I know he will be missed by all of you, hopefully you each can have a little happiness knowing he is now with your beautiful mother again and in peace.   God Bless all your family at this time.

Our thoughts, prayers, and love go out to our nieces, nephews, and all their families. Your Dad will be greatly missed.  He is now with your Mom and brother, Garry.  He is probably telling your Mom to get him a cup of coffee. We have a lot of fond memories of your Dad and he will be our our hearts forever. He lived a full life and did it his way. We are here for you and love you all very much.

I am sorry to hear of your loss our condolences are with everyone in the family...Emma would also like to send her condolences Avery and Genny were very goods friends to Emma.  He will be missed....

this is from me and dora gage, averys sister in law...he will be very missed ,we have tremendous love for him and all the family. our hearts go out to all of you.much love your way. 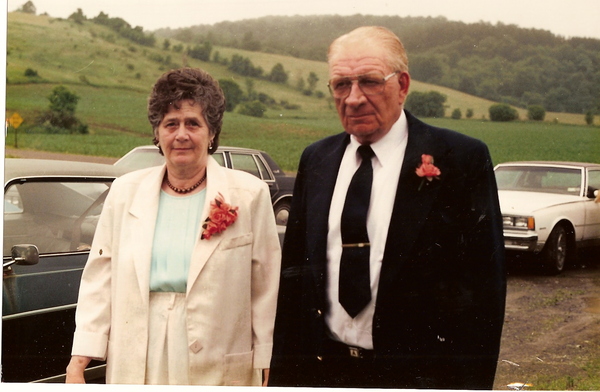