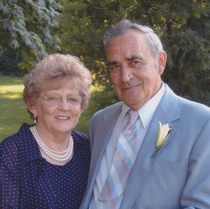 Paul “Pete” A. Harding, 84, of Cincinnatus, NY, passed away on Monday, March 2, 2015 at the Cortland Regional Nursing Facility, Cortland, NY.

Born in Rockdale, NY on November 11, 1930, Mr. Harding was a son of the late Robert and Eloise Hargrave.  A longtime resident of this area, he was a member of the First Baptist Church of Cincinnatus.  He retired from the Carpenter’s Union Local #281, Ithaca, in 1992 after several years of service.  An avid bowler, Mr. Harding held the distinct honor of bowling the first perfect game of 300 at the Marathon Lanes in 1969.  In his spare time, he enjoyed riding his tractor and mowing his lawn.  Mr. Harding was very proud of his children and grandchildren and all of their achievements.  Throughout his life, he always maintained a positive attitude and courage which carried him through all of his trials.  He was a devoted husband, father, and grandfather and will be dearly missed by his family and friends.

Funeral services will be held at the First Baptist Church of Cincinnatus on Friday, March 6, 2015, at 1:00 p.m., with his pastor, Reverend David Perrott, officiating.  Burial will be in Marathon Cemetery.  The family will be present to receive friends at the church on Thursday, from 2:00 p.m. to 4:00 p.m. and 6:00 p.m. to 8:00 p.m.  Expressions of sympathy in memory of Mr. Harding may be directed to the First Baptist Church, 2608 Baptist Ave., Cincinnatus, NY 13040.

“Trust in the Lord with all thine heart; and lean not unto thine own understanding.  In all thy ways acknowledge him, and he shall direct thy paths.”  Proverbs 3:5,6.

To order memorial trees or send flowers to the family in memory of Paul "Pete" Harding, please visit our flower store.