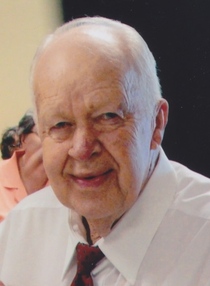 Born in Cincinnatus, NY on January 22, 1927, Mr. Fox was the son of the late Casper and Lepha Perkins Fox.  A resident of the area for most of his life, he owned and operated a dairy farm on Fox Road in Cincinnatus until his retirement in 1988.  After retirement, he moved to the Dryden area where he worked as a lawnmower repairman for several years.  In his spare time, he enjoyed watching the birds and taking an occasional fishing trip to Canada.

He is survived by his loving wife of 66 years, Lois Marion Fox, of Dryden; and his children, Susan Fox of Tucson, AZ and Terry Fox of Waterville.  He also leaves behind his grandchildren, Jeffrey and Sandy Fox; brothers, Ward and Howard Fox, both of Cincinnatus; sisters, Marjorie Kile of Cortland and Helen Fosgate of Mexico; several nieces, nephews, and cousins.

In addition to his parents, he was also predeceased by a brother, Raymond Fox, and a sister, June Christopher.

Funeral services will be held at the K.L. Sharp Funeral Home, Cincinnatus, NY on Saturday, January 10, 2015, at 11:00 a.m. with Fred M.S. Downs officiating.  Burial will be in Taylor Rural Cemetery.  The family will be present to receive friends at the funeral home on Friday afternoon from 2:00 p.m. to 4:00 p.m.

To order memorial trees or send flowers to the family in memory of Robert G. Fox, please visit our flower store.